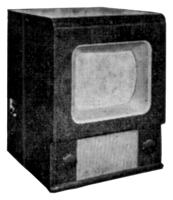 Romac had produced a few radios before expanding into the television market in 1949. An unusual feature of the console is an additional section at the side for used as a cocktail cabinet, though to my mind it looks like someone tacked half a wardrobe on the side of mediocre television cabinet.

They were probably a bit too ambitious for a small company as when they launched thier first television they also produced a 12-channel set for the American market¹. This was not a good idea for a small company that, it is claimed², was poorly managed and working with insufficiantly skilled workforce ; Romac finally went into receivership in 1951.

Note : Some conflict exists between the model numbers.