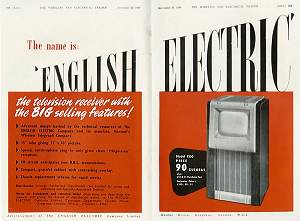 English Electric appeared from nowhere, in terms of radio and televsions. Although they had previously been involved with producing domestic appliances they suddenly jumped straight into the television market with the release of their first model, the 1550, in November 1949. This 15" model was in fact designed by Marconi's, but that does not mean it was a particularly orthodox design. Indeed, the possibility of FM broadcasts seems to have led to this set being equiped with FM sound and able to cover 88-108MHz. This is over five years before VHF FM broadcasting began. They must have been confident that such such broadcasts were iminent as they continued to include provision for FM reception in the 1550's replacement models two years later.

In addition to FM, the chassis also featured "synchrophase" line sync to improve picture quality in low signal areas. In the absence of service data for this model I can't say whether this system was like the common "flywheel" sync that became popular or whether a different approach had been adopted.

In 1950, English Electric went one step further and introduced a 16" CRT featuring the use of a metal cone and a particularly flat front glass, style that had already proved successful in America. At the time there was a shortage of larger screen CRT's1 in Britain, which no doubt explains why several major manufacturers including Bush and Ferguson soon bought out models featuring the CRT. It was even targetted at the then popular home build market ; these days, I wonder what the nanny state would make of a CRT with metal cone at 15KV+ being targetted at the home constructor. The CRT remained in use for a couple of years until the glass technology of normal CRT's enabled 17" models to be produced economically. Being an unusual CRT, by the end of the 50's it had become a particularly problematic tube for which to find a replacement.

As with a number of manufacturers, English Electric seems to have pulled out ot the television market in ~1956.